Rules of the game

Each player receives six cards at the beginning of the game. “SMS” cards are attack cards, they allow players to block opponents who then have to use “phone call” cards, to unlock themselves. When players are attacked, they need to defend themselves with a card of the same colour as the one used against them. When a player attacks by sending a “SMS” card, the text message it contains must always be read out loud upon placing the card. Thus, attacking is always done at the expense of precious seconds of a player’s round. The application, displayed at the center of the table, is an important part of the game. It features a calendar showing the remaining amount of time before the deadline. It also gives players access to their personal checklist and allows them to progress through their mission. The application analyses every participant’s progress in real-time and adapts the amount of obstacles each player will face accordingly. In the end, the best strategy may not be to constantly lead the game… 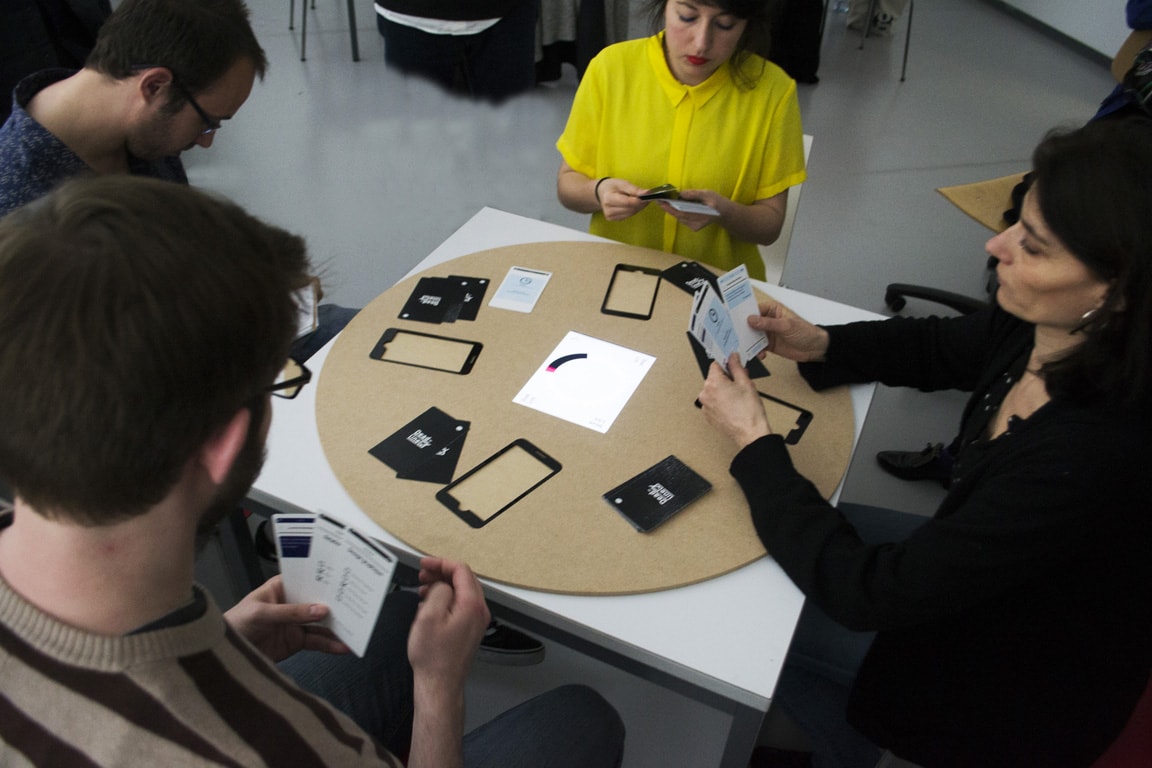 First Deadline prototype, before I started working on the project.

Hybrid game challenge: how to balance the gameplay between two different touchpoints?

When I began to work on this project, the first issue that appeared to me was how to equally distribute players’ attention between the card game and the interface. At that moment, the interface was nothing more than a timer and most of the game took place with the card game. 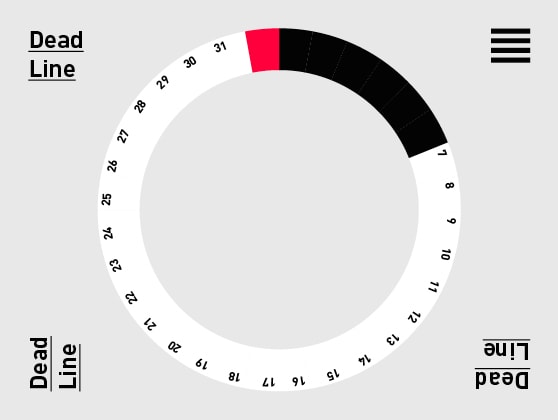 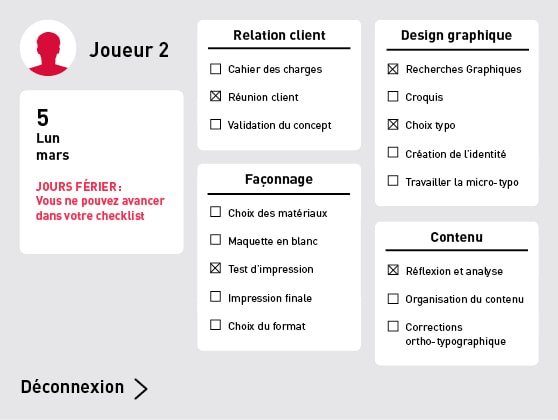 The two main interfaces of the older version.

However, the two founders, Margaux Charvolin and Valérie Pierrehumbert, wanted to adjust the balance between these touchpoints. We established the need to reexamine the role of every component of the game and, after several discussions, we agreed that that, as it possessed all the time-related data, the interface could be used as some kind of “game manager”. As such, it would also need to handle the progression of every player. Giving the interface such a power proved useful for another reason: we could anticipate the end of the game and designed features that would prevent people from knowing it.

I defined a user journey where the interface is much more in control of the game.

Why designing a circle‐shaped interface?

In terms of UX and graphic design, my main challenge was to make every single element fit inside a circle‐shaped interface. However, the choice of that specific shape wasn’t a random one. It was the most logical choice to resolve two significant constraints: First of all, the game is about dealing with time when your job is to be a graphic designer. By analogy, a circle-shaped interface makes this relation to time much more explicit.

Evolutions of “the task selection” interface.

Secondly, the experience is collective: 3 to 4 players have to sit around a table. A rectangular interface would be too complex in that specific context, because it suggests a reading direction to players without taking into account their distribution around the table. On the other hand, a circle-shaped interface suggests the possibility to rotate the interface without forcing people to move around it or having to manipulate the device in the required direction. 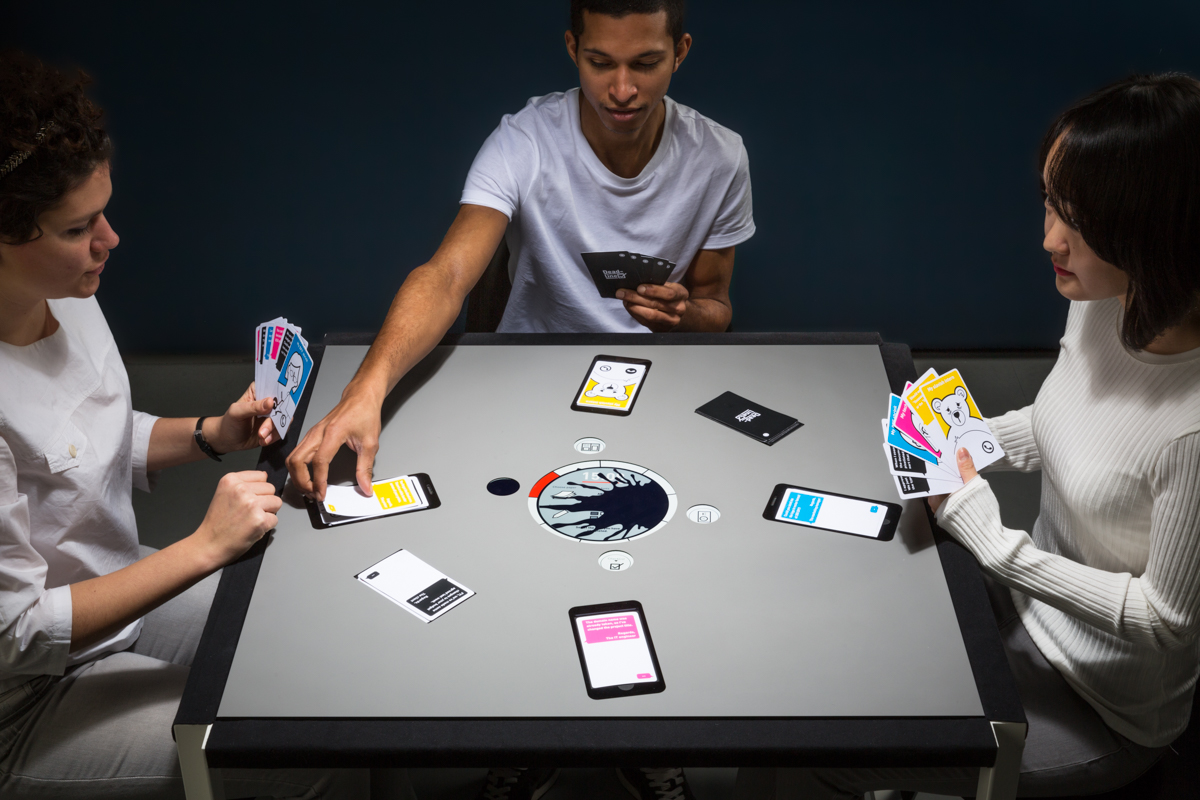 Photograph from Michel Giesbrecht showing the context in which the application is being used.

How to ensure legibility with a circle-shaped interface?

Nevertheless, we still had trouble with the application legibility. It was a high stake as Deadline is a game where players have to read a lot. Therefore, I suggested several interactions to improve legibility. For instance, at the beginning of the game, the instructions are rotating to catch the eye of potential players. This rotation can be directed by anyone who wants to jump into the game. Another solution we went for was to automate the direction in which the interface has to turn. For instance, when it announces which player has to play for the next turn, it will rotate in that direction before spreading out its speech bubble. All these subtle interactions help providing a much more engaging and smoother experience with the interface. The application doesn’t only act as a game manager but becomes an optimized personal assistant for each player.

Above videos show the seamlessness and dynamic of the interface.

A minimalist interface designed for an empathetic experience

This solution we developed to announce each player’s turn works well because it involves only one player, but also because this interaction is repeated during the whole game. Nonetheless, other interfaces, like the “task selection”, or the “checklist” interfaces, work differently. They communicate with the player whose turn it is, but involve other players as well, who may want to track their opponent’s progress. For these interfaces, I promoted the idea of designing icons for each task in every mission. This solution proved to be a perfect way to save space as well as to visually improve the gaming experience.

We designed over 150 icons for the game.

Giving the application a sharp and practical aspect was a conscious choice for another reason: it had to make one with the piece of furniture it is embedded in. The only contrast with the neutral colours of the application is the seldom use of red, appearing here and there to emphasise stressful situations. To balance this overall “serious” feel, i proposed to give the interface some kind of personality. Hence, it is not impossible that the application starts messing around with some of the players. There is no turn direction as well, as it is also the application that randomly decides who is going to play next. This personality we have created is also underlined through motion design elements, such as in the way missions are assigned, or messages appear. 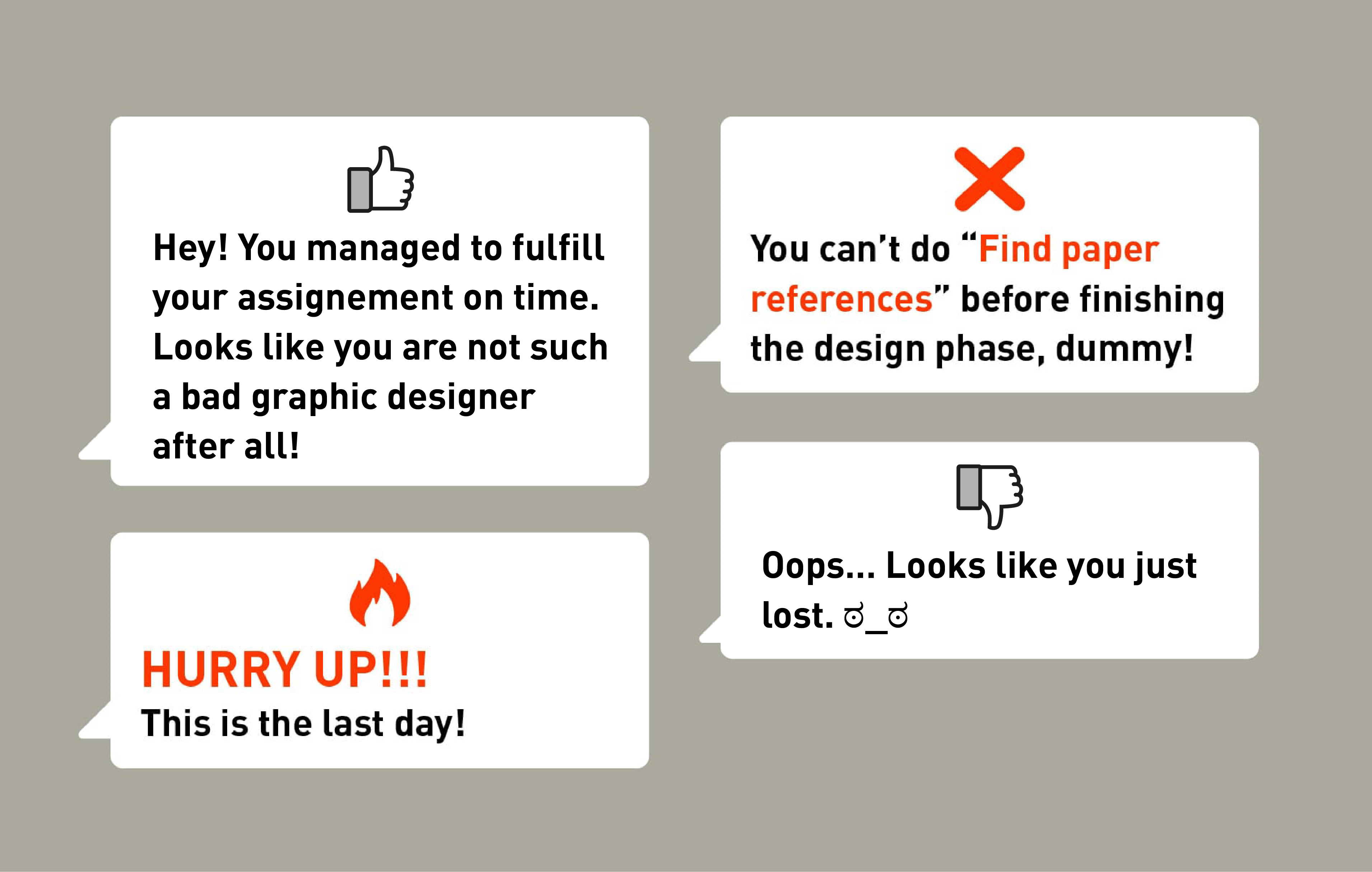 The personality of the interface can also be noticed in the way it “talks” to the player.